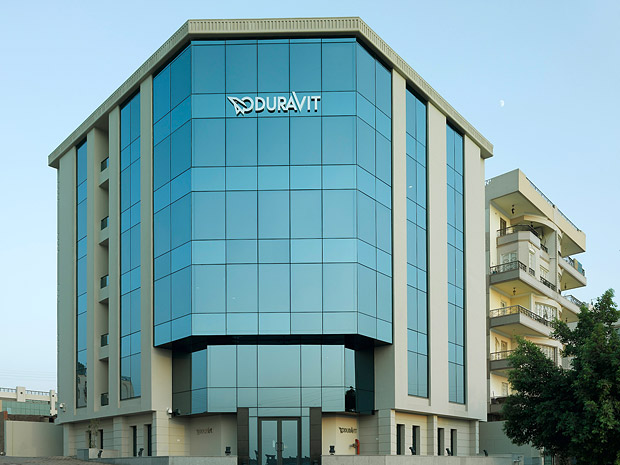 Duravit opens new headquarters in Egypt
Over a two-year period, the bathroom manufacturer Duravit has constructed a new headquarters where all previous offices have been pooled together and that also houses a showroom that showcases the latest developments from the international bathroom and design scene over an area of 1200 m2.

“Last year, we opened a showroom in New York City and completely revamped our showroom in Paris. Egypt is now the third hub completing this international axis, which complements the two showrooms on the German home market”, said Franz Kook, Chairman of the Duravit Group, about the investment. Duravit has long been engaged in a process of internationalisation. Since acquiring a majority shareholding in a factory in France in 1984, the company has successively built up a worldwide network of production plants, marketing companies and sales offices, evolving at a rapid pace in the process. Today, the Duravit Group is active in more than 90 countries throughout the world. The bathroom manufacturer makes around 75 % of its turnover outside of Germany. In terms of volume, Egypt is the largest market for the Group.)
Duravit laid the foundation stone for this market 10 years ago when the bathroom manufacturer acquired the majority shareholding in the then MISR TECH. The production capacities for both ceramics and acrylics have since expanded significantly. In 2002, our involvement in the area of ceramics production led to a new partnership with a sister company that manufactures acrylic products. “This second opportunity for Duravit is also expressed in the confidence that the Egyptian shareholders place in us. I am personally very proud of this”, concluded the Chairman.
Overall he is extremely positive about Duravit’s 10 years in Egypt: “Duravit's market presence in Egypt has risen substantially, thus contributing to the international success of the Duravit group. Our strategy of operating as a local supplier and the short-term availability of the products at local level are appreciated by our customers as important competitive factors. Both plants form a crucial part of the Duravit Group today.”

Brief history of Duravit in Egypt
In 1999, Duravit AG with headquarters in Hornberg acquired more than 51% of the shares in an Egyptian company and thus became the majority shareholder. It was founded in 1997 and built a sanitary ceramic plant in the Cairo region; this went into production at the start of 1999. The products were marketed under the Duravit brand; the company was called Duravit Egypt Sanitaryware Manufacturing Company S.A.E.

In 2002, this involvement led to a new partnership with a sister company that manufactures acrylic products. The Duravit shower trays, baths and wellness products are now manufactured by this company, which is also situated close to Cairo. In 2008, production capacities in the ceramic plant were increased to 2 million large parts per year. The opening of the new headquarters in Cairo on 28 September 2009 is an early highlight in the company’s history.